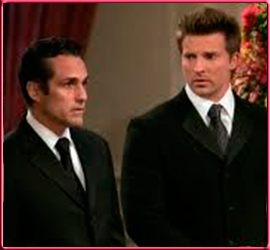 The bond between Emily & Sonny began out of deep mutual respect and friendship.  Sonny Corinthos had a long-standing history, partnership & friendship with Emily’s  older adoptive brother Jason Morgan.  Jason came to work for Sonny after he recovered from a car accident that left him dealing with permanent brain damage resulting in memory loss.  Jason felt completely alienated by his blood relatives, the wealthy Quartermaine family.  Jason could no longer fill the role he once had when he had his memories of Jason Quartermaine.  That was a life he simply did not remember belonging to, and he chose to let it go, along with  Jason Quartermaine.  As Sonny’s friend and business partner, Jason found the freedom of unconditional acceptance with Sonny, and began a new life as Jason Morgan.  Yes Sonny’s lifestyle involved illegal activity, but it was more important to Jason that he have the freedom to live life on his own terms, and make his own choices. 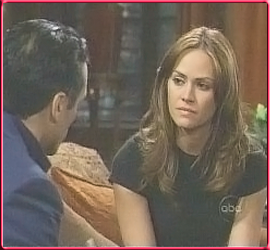 Sonny & Emily slowly built a friendship over six months of screentime beginning in May of 2005.  Emily had been brutally raped by a man named Conner Bishop. she had asked Conner to impersonate her husband, Nikolas Cassidine (as the two looked alike) in an effort to clear Nikolas of criminal charges, so that he could return home to Emily.  Conner became obsessed with Emily, attracted her and brutally raped her.  As Conner was lunging toward Emily again, she shot him in self-defense.  She spent months plagued with guilt by her choice to encourage Conner to pretend to be Nikolas.  Traumatized,  Emily initially couldn’t face the turmoil of the rape aftermath.  She underwent a period of shock and denial.  She unconsciously pushed the experience out of her mind in an attempt to pretend it didn’t happen.  Well-meaning friends Elizabeth & Lucky; tried to force her to get help, which only sent Emily deeper into retreat.  She felt she couldn’t be honest with her husband Nikolas about what happened, so she kept  it hidden. 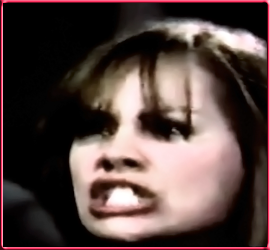 When Emily finally got up the courage to tell Nikolas the truth, she still was not ready emotionally or physically to pick up where they left off in their marriage.  She tried to give Nikolas what she felt he needed from her in terms of intimacy, but truthfully, she was only pretending to be enjoying things like touch, and the physicality of  their relationship.  She felt that she would hurt him if he knew the truth. As time passed, Emily began seeing a therapist.  While in role-play during a therapy session, Emily was able to confront “Conner” with all the agony she’d been keeping bottled inside:

“You took my body like it belonged to you… Like it didn’t matter what I felt, or what I wanted. This isn’t just a body, Conner, just flesh and blood and muscle that you can use and abuse any way you want.  Someone lives in here, I live in here.  I have a heart and a soul.  You had no right!”

After experiencing the benefit of therapy herself, Emily found a great deal of comfort and fulfillment offering support to Sonny’s little boy Michael (who was also in therapy, but didn’t want to stick with it.)  Emily offered to reach out to Michael and help him understand that therapy can be very helpful.  When Sonny was curious about why she was so invested, Emily confessed she had been raped.  She had resisted therapy in the beginning, but she now understood that her sessions were helping her in  way nothing else could.  Sonny immediately could relate to her experience as he had gone though his own darkness as a child, at the hands of domestic violence.  The two experiences resonated in that they “crippled the soul.”  A friendship based on mutual respect blossomed.  Emily continued to support Michael, and she was a sounding board for Sonny when he finally had to send his ex-wife Carly to a hospital to seek professional help. 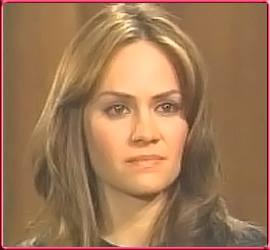 Nikolas eventually became aware that Emily was intentionally avoiding being alone with him.  He became increasingly frustrated and resentful toward Emily.  He sought solace in a new found friendship with Courtney Mathews (Sonny’s sister).  Despite they’re best intentions to resist, their attraction to each other was undeniable.  Nikolas & Courtney  began having an affair despite being married to other people.

Appalled that Emily should have to deal with what he called indignity, Sonny  invited Emily to stay in the guesthouse on his estate while she sorted things out.  This made Nikolas furious.  The mere hint of Emily spending time in close proximity to Sonny Corinthos, sent the whole town into a frenzy of warnings and cautionary tales about Sonny. 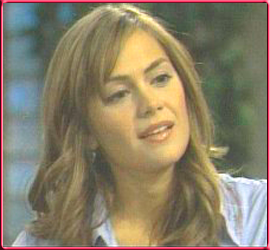 Emily was too worried about her medical studies, besides; she and Sonny were friends.  Reese Marshall had just died, and Emily felt responsible for misdiagnosing her.  She was riddled with self-doubt and guilt, questioning her ability to become a doctor.  When Emily took a temporary leave of absence from medical school to sort out her feelings; her entire family blamed Sonny and his “criminal underworld” for her choice.  Emily was bewildered and confused.  Her decision had nothing to do with Sonny. They were friends In fact; Sonny had encouraged her not to give up and to believe in herself. She would make an amazing doctor.    Yes, Sonny was a Mob Boss, but she had seen a whole other side to him and she understood that people living the mob life make that choice young before they know truly what they have gotten into.  Once you are in that life, you just can’t “get out.”

Us Against The World

Sonny’s ex-wife Carly started obsessing over the idea that Sonny & Emily were falling in love.  The only catch was, the thought had not occurred to either of them.  They had grown very close, but in love?  Emily felt Carly’s accusations were insane.  But Carly was relentless.  Emily and Sonny hadn’t done anything but be friends, yet the whole town was opposed to a romance between them.  One day, Emily was completely  blindsided when she had a dream about Sonny which was about more than friendship.  Had she developed feelings for Sonny?  Suddenly she found herself thinking about him constantly. 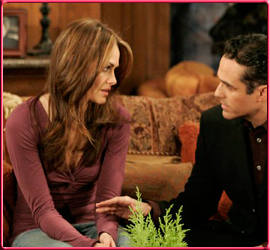 Emily’s brother Jason had always been unconditionally supportive of her, but when Carly planted ideas in his head about a relationship between she & Sonny, for the first time ever, he adamantly rejected the idea.  He warned her to stay away from Sonny.  He felt she couldn’t handle the “mob life,” and that Sonny would eventually hurt her.  He would not stand by and watch that.  Emily denied any romantic feelings and promised Jason they were just friends.  Deep down though, Emily knew this was a lie.  She did have feelings for Sonny.  They grew stronger by the day, but she knew they were unrequited, so there was nothing to worry about.

Secretly though, Sonny was falling deeply in love with Emily. but pushing his feelings aside, to protect her and to honor his friendship with her brother.  Sonny had promised Jason, he wouldn’t cross the line with Emily.  One might, Emily rescued Sonny’s son Michael from drowning.  In a moment of weakness overcome with growing feelings for Emily the two kissed.  Reeling from the guilt. Sonny did everything he could to push her away.  He even staged a kiss with his ex-wife in hopes that it would send Emily running in the opposite direction.

Amidst the craziness of a viral outbreak at General Hospital, Jason told Sonny if her pursued a relationship with his sister, he would have no choice but to take drastic measures to stop it.  The outbreak of the virus claimed lives.  Sonny & Nikolas both became infected.  Terrified that Sonny might lose his life, Emily confessed she had fallen in love with him.  It happened gradually, but it was true.  Sonny’s sister Courtney died, but the son she shared with Nikolas survived.

The World Can Wait

Aware that things could have gone another way, and Sonny could have died, Emily decided she wanted to be with him.  Sonny felt that maybe they should wait.  She hadn’t been intimate with anyone but Nikolas since the rape.  Emily was sure of one thing, she loved Sonny.  He had unknowingly brought her back to herself.  She thought she had lost her sensuality with the rape, but slowly it had re-awakened over time with him.  Sonny & finally gave in to their feelings and made love.  “It has gotten really basic for me, I love you.  I want to feel.” Emily confessed.

Sonny & Emily already had so much opposition from all of Port Charles, in the face of so much sadness and death following the virus epidemic.  They decided to keep their relationship temporarily secret.   Sonny whisked Emily away to a villa in Spain for a private vacation where they could be alone and free of judgement.  Their bond and love for one another growing deeper than either of them expected.  Emily revealed she also spoke Spanish, and they were able to relax and revel in being alone together.  While away, Sonny began having nightmares.  He was terrified that something about him or his life would hurt Emily.  He explained to Emily, that he often had nightmares or got “keyed up” when he was happy.  It had been happening for years.  There were dark things about him he was afraid of letting her see. 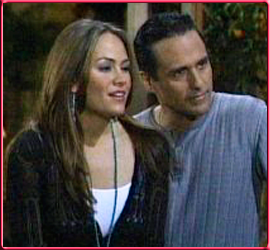 When Sonny & Emily returned from Spain, Jason suspected that Sonny & Emily were both lying to him about their “friendship.”  When Sonny & Emily both made it clear that they were in love and had no intention of giving each other up, Jason put a plan in motion to take over Sonny’s businesses in an effort to force Sonny to give Emily up.  Jason’s tactics didn’t work.  The rift between Sonny & Jason over Emily was at a solid unshakable stalemate.  The two men who were like brothers, nearly came to the point of killing each other.  Having lost his business to Jason, Sonny’s mood swings and erratic behavior escalated.    Emily began putting pieces together from things Sonny had shared with her about deep-rooted patterns he would go through, these things he called “episodes.”  Sonny had always written them off as something to live with because he deserved to suffer.  Emily was convinced his issues were beyond him – a health condition.  With her love and support, Sonny began therapy, sought treatment, and was diagnosed with Bipolar disorder.

Sonny ultimately ended the relationship he said was the “healthiest” he’d ever had, because he loved Emily and wanted her to have a life free from danger and violence.   He referred to her as an angel when they said goodbye.