Natalia Livingston is one of those people who lights up a room when she enters it.  She embodies generosity and compassion towards others from all walks of life.  She is one of those giving spirits, who uplifts everyone she comes into contact. She does this without any expectation attached, without any effort.  She genuinely doesn’t know any other way to be.

Born in Johnstown Pennsylvania  March 26, 1976, Natalia’s background is half Mexican. She is bilingual, fluent in Spanish Her father James is a doctor, and her mother Martha is a Spanish teacher.  Natalia was first bitten by the acting bug in high school.  She earned a degree in Sociology, and completed an internship in Social Work following graduation from Emory University.  Her passion for acting continued throughout university, and she eventually decided to move to Los Angeles to pursue her dream.  Known as “Natty” by close friends and family, Natalia has an unassuming nature capable of putting people at ease.  She is completely genuine in everything she does, and it seems only fitting that someone of such reliability be discovered at Home Depot.   From there, she landed several commercials, and her professional acting career got its start.

Natalia is best known for taking over the role of Lead heroine “Emily Quartermaine” on the ABC drama General Hospital.  Natalia took over role of the beloved Emily Quartermaine from  actress Amber Tamblyn  who was well known by the viewing audience and recognized as the young actress that originated the role of Emily as a young girl.

The character of Emily was aged by the writers at the time Natalia was cast in the role.   Natalia had her work cut out for her, stepping into the shoes of a well established actress.  Natalia’s hard work, acting skills and genuine commitment to putting her heart into the role of Emily paid off.  She had a strong connection to Emily’s first major storyline on General Hospital which dealt with Breast cancer.  Natalia discovered her own breast mass after completing a self exam after the topic was covered on the Oprah Winfrey Show.  She received a clean bill of health and went on to lend support wherever she could to the Susan G Coleman foundation dedicated to research,  support, and encouragement for all who have been touched by the experience. 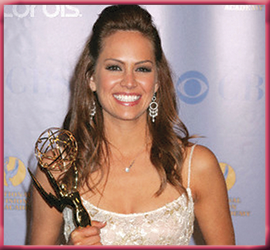 In 2005, Natalia was recognized by her peers and received a Daytime Emmy  for Outstanding supporting actress in a drama series,  Natalia played Emily until the death of the character at the Black & White ball in 2008.  In 2009. Natalia returned to GH to play Rebecca Shaw. A woman who was later revealed to be Emily’s twin sister, but the two characters were indeed polar opposites.  Natalia’s portrayal of  Emily’s character was loved to such a degree by the viewing audience, that “Rebecca” didn’t seem to catch on.  Natalia had taken several roles in smaller independent films, and by the time she left General Hospital, established herself a successful actress in Daytime television. In 2011, Natalia joined the cast of Days Of Our Lives as Taylor Walker, but the show decided to take the character in a different direction.  Natalia was released from her contract after a short run.

Natalia currently runs a coaching  and mentoring business for aspiring actors,  She uses her skill and knowledge to help actors prepare for the audition process, and to work professionally in the entertainment industry,  In addition, she runs her own photography business while still working professionally as an actress.  Natalia is a deeply motivated humanitarian who has traveled the world   as a voice of Love and Equality.  She currently lives in Atlanta Georgia with her two beautiful dogs.